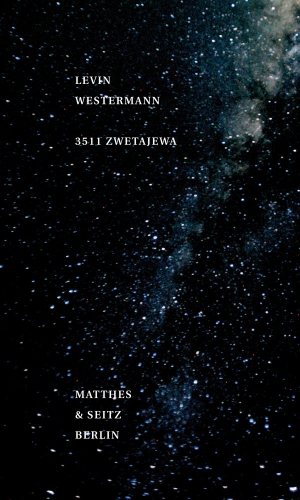 Achilles races through the night at 130 without a taillight or consideration. The war for Troy is still raging. While the Attic hero, unshowered and bloodied for lack of time, gives a press conference twenty minutes after the end of the battle and quotes Simone Weil, Westermann writes a cantata of seemingly infinitesimally small intervals of reflection with a smoking pen. If we were just traveling with Chekhov, we may now walk with the poet through the life of his namesake under the landmark of that asteroid, the planetesimal with the name 3511 Tsvetaeva. Letters, images, relationships, he brings to the verse : "She believed in the good in man, in / that good things happen to him who does good things." In the end, there will be a whole cosmos to sink. But from Levin Westermann's linguistic infinitesimals, longings will emerge anew.

Levin Westermann, born in Meerbusch in 1980, studied at the Bern University of the Arts and lives as a freelance writer in Biel. In 2020 he was awarded the prestigious Clemens Brentano Prize of the city of Heidelberg. For his poetry collection bezüglich der schatten he received the Swiss Literature Prize 2021.

"A writing toward silence, toward silencing; and also a writing in which the boundaries between poetry and prose - I don't want to say dissolve - but are nevertheless called into question."
- Beate Tröger, WDR3

"Levin Westermann is a poet who makes no secret of being on a quest. A search for traces of the famous Russian writer Marina Tsvetaeva - a funeral poem full of force and anger, marked by intimacy and distance."
- Insa Wilke, Deutschlandradio Kultur

"These quiet poems by Levin Westermann, haunting through omission and metaphorical sparseness, speak of the existential exposure of every true poet."
- Michael Braun, NZZ

"In all four parts, the introductory 'Expedition' included, Levin Westermann succeeds in creating strong moods in a radically modern inward and at the same time relentlessly externalizing way.His poetic imagery is powerful and somber, but it also always hints at a perhaps sarcastic irony that breaks the train into the pathetic. "
- Beat Mazenauer, viceversaliteratur.ch

"Seen in the light, this is a very radical piece of literature that lies before one, 'radical' in the sense of 'radically otherworldly.' Among contemporary authors who have devoted themselves to the small form, Westermann is the most otherworldly, not to say metaphysical. One comes quite close to his texts if one attests to the fact that in them literature declares itself to be the transcendental subject. But this does not discredit them. Their eternity is not a vanishing point towards which the events, the cruel ones in particular, evaporate and blur. The other way around is the path of this writing: sub specie aeternitatis, it rummages through the dust from which the world is made."
- Philipp Theisohn, Swiss Book Year

"In Westermann's case, authorship means being able to perform perfect mood changes with the respective new material and to balance this with one's own linguistic style and poetic concerns."
- Christian Metz, FAZ