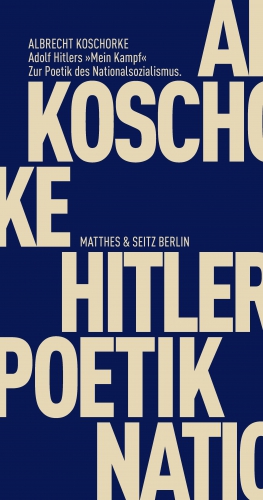 On Hitler‘s Mein Kampf. The Poetics of National Socialism

Genre: Essay, Nonfiction
An examination of the narrative strategies employed in the most dangerous book of the twentieth century and a reflection on totalitarian literature.

In December 2015, the first German edition of Mein Kampf since 1946 appeared, with Hitler‘s text surrounded by scholarly commentary apparently meant to act as a kind of cordon sanitaire. And yet the dominant critical assessment of the most dangerous book of the twentieth century is that it is boring, unoriginal, jargon- laden, badly written, embarrassingly rabid, and altogether ludicrous. How did the unreadable Mein Kampf manage to become so historically significant? Koschorke argues that Mein Kampf cannot be reduced to an ideological message directed to all readers. He shows that we can discover for whom Hitler strikes his propagandistic poses and who is excluded. Koschorke parses the borrowings from the right-wing press, the autobiographical details concocted to make political points, the attack on the Social Democrats that bleeds into an anti-Semitic conspiracy theory, the contempt for science, and the conscious attempt to trigger outrage. A close reading of National Socialism‘s definitive text, Koschorke concludes, can shed light on the dynamics of fanaticis

Albrecht Koschorke, born 1958, is a professor of Modern German Literature and General Literary Studies at the University of Konstanz. Since 2006, he has been part of the cluster of excellence on »Cultural Foundations of Social Integration« in Kontanz and became the speaker of the post graduate programme on »The Real in the Culture of Modernity« in 2010. He received the Prize of the Academy of Sciences in Berlin-Brandenburg in 2002 and the Leibniz-Prize of the German Research Foundation in 2003.

"In his new analysis of Hitler's Mein Kampf he [Koschorke] shows us how ideology works and draws comparisons to the current discourse."
Karin Janker, Süddeutsche Zeitung

"Albrecht Koschorke chose a quite unusual approach to Adolf Hitler's Mein Kampf: He focuses on the poetics of this work of propaganda and finds some remarkable literary and strategical topoi."
Jörg Magenau, Deutschlandradio Kultur

"Koschorke is far from wanting to rehabilitate Mein Kampf in any way, but his smart and stimulating essay shows that 'the lure of threat', that comes from the book, cannot only be explained by the fact that it is built from varying ideas of different ideologies, that all seem crazy, dull or even ridiculous."
Wolfgang Schneider, Deutschlandradio Kultur