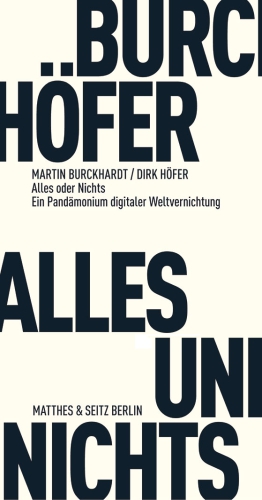 All and Nothing. A Digital Apocalypse

Genre: Essay, Nonfiction, Philosophy, Sociology
Why 1 = presence and 0 = absence and the digital world formula is x = x n: an exploration of meaning in a universe of infinite replication.

In 1854, the British mathematician George Boole presented the idea of a universe the elements of which could be understood in terms of the logic of absence and presence: 0 and 1, all and nothing—the foundation of binary code. The Boolean digits 0 and 1 do not designate a quantity. In the Boolean world, x times x always equals x; all and nothing meet in the formula x = x n. As everything becomes digitized, God the clockmaker is replaced by God the programmer. This book–described by its authors as “a theology for the digital world”— explores meaning in a digital age of infinite replication, in a world that has dissolved into information and achieved immortality by turning into a pure sign. All and Nothing compares information that spreads without restraint to a hydra—the mythological monster that grew two heads for every one that was cut off. Information is thousand-headed and thousand-eyed because Hydra‘s tracks cannot be deleted. It shows that when we sit in front of a screen, we are actually on the other side, looking at the world as an uncanny reminder of the nondigitized. It compares our personal data to our shadows and our souls, envisioning the subconscious laid out on a digital bier like a corpse.

Together they both created the game TwinKomplex.