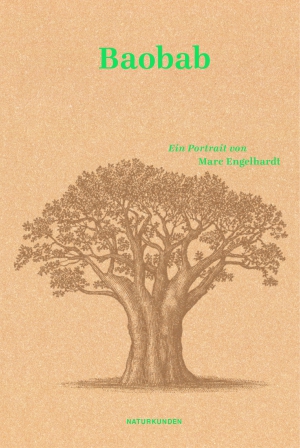 The baobab is an African miracle: The huge, misshapen tree, which looks as if it has grown with its roots toward the sky, offers not only food for the people south of the Sahara, but also an almost immeasurable storehouse of water and wisdom. Because it thrives even in heat and in spite of drought, it is not infrequently the center of settlements and legends. Marc Engelhardt follows the myth-enshrouded baobabs across the African continent and meets people who are as addicted to the bottle-shaped giants as he is himself : a conservationist who is who tirelessly grows baobab cuttings on Madagascar, a Senegalese inventor who uses the baobab to fight hunger in the Sahel, and a healer in Malawi who believes she can use the tree to cure diseases. After all, these often centuries-old, wondrous trees seem to have their own laws of nature.

Marc Engelhardt, born in Cologne in 1971, studied geography, biology, law and philosophy. He is the author and editor of numerous books, including with the correspondent network Weltreporter. For his book World Community on the Brink, he was awarded the Prix Nicolas Bouvier.