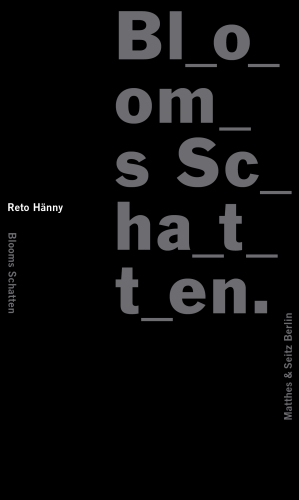 Ulysses in one sentence? The Swiss Reto Hänny undertakes this grandiose venture. Like his teacher Joyce, he follows his protagonist Bloom, that world-famous unsuccessful advertisement canvasser, through an almost uneventful day. Only Bloom's wife, a voluptuous opera singer with Spanish blood, receives her lover in the afternoon, threateningly overshadowing this ordinary day. 'Bloom's Shadow' has been written in playful engagement with 'Ulysses' by James Joyce: a fast-paced, turgid and delightful prose piece, allusive and trickily misleading, every word in the right place, also in its rhythmic and compositional precision a radical work of linguistic art.

Reto Hänny was born in 1947 in Tschappina, a small mountain village in Graubünden. After extensive travels and various jobs, including as a goatherd, school teacher and stagehand at the theater in Chur, he made his debut in 1979 with Ruch. Ein Bericht and first caused a stir with Zürich, Anfang September, a report on the 1980 Zurich youth riots. Alongside his intensive involvement with new music and the visual arts, a manageable but all the more dense literary oeuvre emerged. Hänny, who has received numerous literary awards, including the Ingeborg Bachmann Prize, the Zolliker Art Prize and the Swiss Grand Prix for Literature, lives as a freelance writer in Zollikon/Zurich and Graubünden.

"Literature at the greatest possible distance from the mainstream".
Urs Widmer

"An ingenious experiment in shadows that aesthetically separates a Marianas Trench from the normal seasonal commodity of the same old stories."
Alexander Cammann, Die Zeit

"Reto Hänny paraphrases James Joyce's 'Ulysses' and creates a work of its own musical-poetic power. One learns to read anew with this book."
Roman Bucheli, NZZ

"Like Joyce, Hänny's book depicts the cognitive odyssey of an everyman in the turbulent shallows of everyday uneventfulness. Playfully light-footed, cynically sharp snail shell sentences wind ever more tightly around a detail .... A delight."

"No author has so challenged his readership and so inspired colleagues as James Joyce. Now Zurich writer Reto Hänny has also prepared a 'soup' with it - a very special one. One follows the Bloom of his Joyce adaptation spellbound."
Ulrike Baureithel, WOZ