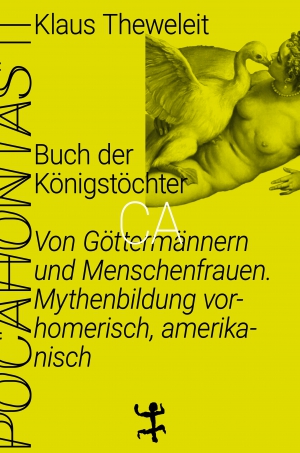 The Book of the King's Daughters

Pocahontas Complex Vol. II : Of men of the gods and women of men. Mythmaking prehomeric, American.

The Book of the King's Daughters traces the mythical stories surrounding Medea and Pocahontas. The second volume of the Pocahontas series explores how ancient Greek "king's daughters," used by the gods to bear offspring, were made subservient and eventually handed down as mythical figures into the age of pop culture and advertising. While their semi-divine offspring turn against them in the end and make themselves useful in the service of the divine fathers, the king's daughters are confronted with the loss of their culture and remain as victims of the male claim to ownership and conquest of land, a fate that apparently can only be turned around in Medea's case by the murder of her own child. Klaus Theweleit's legendary Pocahontas series also still addresses current gender issues and touches on traditional female roles.