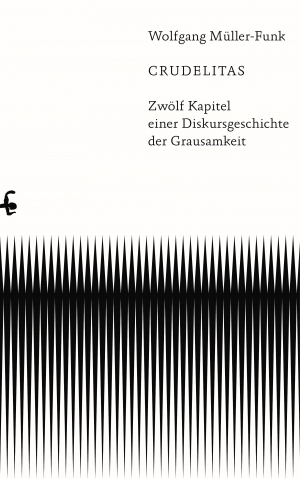 Twelve Chapters of a Discourse History of Cruelty

Genre: Philosophy, Essay, Nonfiction
On the terrifying ingenuity of cruelty - and what it teaches us about human beings

Man "is also the cruel animal". This radical thesis is the starting point of a discourse history of cruelty. By defining cruelty as part of the process of civilization, Wolfgang Müller-Funk succeeds in providing a shattering view of an aspect of human evolution that common descriptions conceal: The experimentation with possibilities and the latitude and forms of representation conditioned by the language of words point to entirely artificial forms of violence that are neither accidental nor necessary. The uncanny appeal of cruelty here also lies in its dubious promise of unhindered self-assertion. In twelve concise chapters-on Robert Musil and Ernst Jünger, Seneca and Friedrich Nietzsche, Elias Canetti and the Marquis de Sade, Jean Améry and Mario Vargas Llosa, Sigmund Freud and Maurice Merleau-Ponty, Ismail Kadare and Arthur Koestler-Müller-Funk's study gives the lie to Gottfried Benn's statement that liberal man cannot look violence in the eye. His history of cruelty, informed by literature, points a philosophical way to resist its temptations.

Wolfgang Müller-Funk was Professor of cultural studies in Birmingham and Vienna and, among other things, Fellow at the New School for Social Research in New York and at the IWM in Vienna.