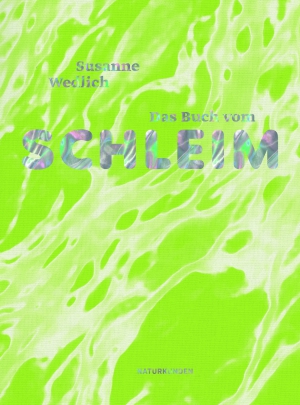 Genre: Nature, Nature Writing, Essay, Nonfiction, History, Biology
An original and revelatory exploration of the hidden world of slime – the substance upon which we and our world depend

Slime is an ambiguous thing. It exists somewhere between a solid and liquid. It inspires revulsion even while it compels our fascination. It is a both a vehicle for pathogens and the strongest weapon in our immune system. Most of us know little about it and yet it is the substance on which our world turns.

In this ground-breaking and fascinating book, Susanne Wedlich leads us on a scientific journey through the 3-billion year history of slime, from the part it played in the evolution of life on this planet to the way it might feature in the post-human future. Written with authority, wit and eloquence, Slime brings this most nebulous and neglected of substances to life.

Susanne Wedlich studied biology and political science in Munich and has worked as a writer in Boston and Singapore. She is currently a freelance science journalist for Spiegel Online, Süddeutsche Zeitung and Spektrum der Wissenschaft. She lives in Munich and speaks fluent English.

"Susanne Weidlich is your smart and genial guide through the curious realms of natural goop, how we think of it, treat it and need it. An illuminating and eloquent story of slime, it will leave you appreciating in whole new ways the sticky stuff that covers our world, inside and out" Helen Scales, marine biologist and author of The Brilliant Abyss

"Rich and strange... a deft cultural history of the idea of slime as well as an up-to-the-minute exegesis of its science" The Daily Telegraph

“The reader never really feels as though they have got hold of the matter of Wedlich’s book, rather, they rea being provoked into punching through layer after dizzying layer, through theories about the spontaneous generation of life, through the life cycles of carnivorous plants and into the tactics of Japanese balloon-bomb designers in the Second World War, until, dizzy and gasping, they reach the end of Wedlich’s extraordinary mystery tour, not with a handle on slime exactly, but with an elemental new vision of what life may be: that which arises when the boundaries of earth, air and water are stirred in sunlight’s fire.” The Times