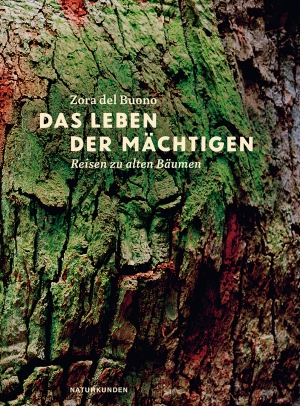 A Journey to Old Trees

Harcover with 30 colour photographs by the author

Genre: Nonfiction, Nature Writing, Essay, Narrative Nonfiction
If trees could speak, what would they tell us?

Zora del Buono sets out on the oldest trees of Europe and North-Amerika. She wants to listen to the stories of these unusual living beings. She starts by paying a visit to the Ankerwycke yew tree under which Anne Boleyn met for the first time the one who was to become her husband and executioner, Henry VIII. She admires in Berlin the Big Mary, which used to be the Humboldt brother's playground and Goethe's shade tree until Hermann Göring turned it into a memorial.

Zora del Buono get caught in a snow storm while hiking through the swedish upland moor in order to see the oldest tree of the world and its 9,500 years old, a tree so small and thin that it reminded her of a forgotten Christmas tree. She encounters during her travel Native Americans, forest wardens and arborists – and the classmate of a drug addict who burned down a 3,600 years old swamp cypress.

With a deep understanding for the human abysses and the secrets of dendrology, Zora del Buono tells the deep rooted stories around the majestic personnalities of trees – and carry us along in her fascination for the mute witnesses of mankind.

Zora del Buono, born 1962, grew up in Bari and Zurich. Since 1987 she lives in Berlin. After studying architecture and working as a construction manager she now works as a writer since 2008. Her book about trees she fulfils herself a long-cherished dream.

»Zora del Buono does not humanise trees, she avoids all animistic thoughts, which would give spruces, pines and limetrees a soul. Her view on nature is poetic.«
Kirstin Martins, Across Cultures