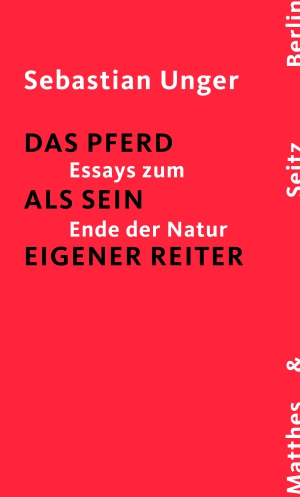 The Horse as its Own Rider. Essays on the End of Nature

Genre: Literary Novel, Poetry, Essay
"Alienation was not only bad, but also a skill."

Sebastian Unger climbs deftly and daredevilishly into the scaffolding of our shattering conception of nature. Nature is physically at the provisional end of its capacity to bear the weight of human beings. But even if it should succeed in mooring it once more in a manner appropriate to the species and making it weatherproof, it will no longer protect us from a total collapse with our economic sphere. In his literary essays and prose essays, Sebastian Unger asks whether the currently so stigmatised "other of nature" is not at the same time the only source that confronts man as a miraculous offer of self-limitation. With the help of the ironically conceived opposition of animal and nature, he playfully approaches these questions. In the process, the defence of nature against the "survival animal", into whose warming fur man, seemingly pointing away from himself, begins to slip, becomes the expression of a mischievous love of animals. It is necessary to endure the ambivalence that so much suffering has arisen with the concept of nature, but at the same time with it the tool to identify it as such, a tool that is now on the list of endangered species together with the natural beings, precisely as the way to be able to read and recognise nature.

Sebastian Unger, born in Berlin in 1978, received the Open Mike Poetry Prize in 2011. His poetry collection *Die Tiere wissen noch nicht Bescheid* (2018) was awarded the Frankfurt Poetry Prize and the Düsseldorf Poetry Debut Prize. He lives in Berlin and teaches in other Asian countries, most recently in Hanoi, Delhi and Shanghai.