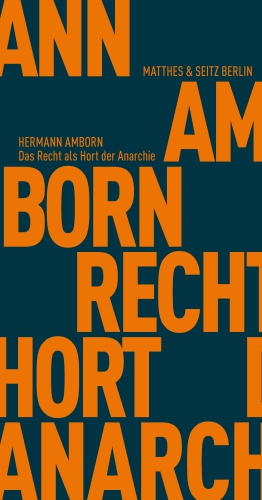 The Law as a Refuge for Anarchy

Societies without Domination and State

285 pages
Genre: Sociology, Ethnology, Essay, Nonfiction, Politics, Philosophy
A study of communities in the Horn of Africa where reciprocity is a dominant social principle, offering a concrete countermodel to the hierarchical state

In this book, leading anthropologist Hermann Amborn identifies a countermodel to the state, describing communities where reciprocity is a dominant social principle and where egalitarianism is a matter of course. He pays particular attention to such communities in the Horn of Africa, where nonhierarchical, nonstate societies exist within the borders of a hierarchical structured state. This form of community, Amborn shows, is not a historical forerunner to monarchy or the primitive state, nor is it obsolete as a social model. He examines not only how the nonhegemonic ethos is reflected in law but also how anarchic social formations can exist. In the Horn of Africa, the autonomous jurisdiction of these societies protects against destructive outside influences, offers a counterweight to hegemonic violence, and contributes to the stabilization of communal life. In an era of widespread dissatisfaction with Western political systems, Amborn‘s study offers an opportunity to shift from traditional theories of anarchism and nonhegemony that project a stateless society to consider instead stateless societies already in operation.

Hermann Amborn, born 1933, has worked as an ingenieur before turning to ethnology and becoming a professor at the University Ludwig-Maximilian in Munich. His work focuses on agrarethonology, anthropology of work, oral traditions and concepts of space and time.