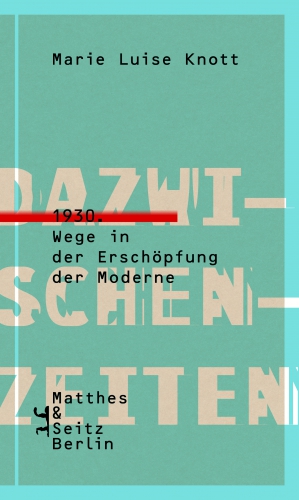 1930. Paths to the Exhaustion of Modernity

Genre: History, Art, Humanities, Essay, Nonfiction
What is left when everything that was safe and certain starts to shake? How do people react? And artists?

Marie Luise Knott‘s new book asks if and how the arts were affected by the aporia of their era. No Longer and Not Yet examines how art was created in the year 1930. What possible power can arise from an art that itself emerges from thicket of opinions? An art that does not radicalize political notions but instead sharpens the aesthetic tools available? Marie Luise Knott takes four artists as case studies for her argument: The last curtain fell for director and producer Erwin Piscator and his motorized, electrified multi-level stage, while writer Karl Wolfskehl lost his “Secret Germany”; Bertolt Brecht barbarized the world of theater with his “Lehrstücke” (“Learning Plays”), and Paul Klee invented a completely new game played with paint and brush in 1930.

Marie Luise Knott is a journalist, translator, and author living in Berlin. In 1995 she founded the German edition of Le Monde diplomatique and has been its editor-in-chief for the past eleven years. She has written numerous works on art and literature, as well as two important studies of Hannah Arendt.

"Marie Luise Knott's art lies in the subtle: in the exhibition of ambivalences, in the moments of recognition across political and aesthetic camp boundaries. If the scenario makes one fear fateful murmurs, apocalyptic platitudes, Knott approaches the moments of 1930 cautiously and quietly. She succeeds in condensing the steam and smoke of the outgoing 'Roaring Twenties' into cool observations. Methodological prefaces are replaced by reflections on window and view, stage and auditorium." - Marcel Lepper, Frankfurter Allgemeine Zeitung

"The very attempts to overcome chasms .... revealed the loss of what unites. Theaters and salons were no longer spaces of commonality. language fragmented. The conclusion to the present is not compelling, but revealing." - Nicolas Freund, Süddeutsche Zeitung

"In Knott's inspiring essays, comparisons with the present automatically suggest themselves. Thus one thinks of Frank Castorf's 'Volksbühne' with Piscator or of the similarly brilliant lecture artist Thomas Kling with Karl Wolfskehl. [...] One involuntarily wonders whether there is a work today that pervades the present in the same way as Paul Klee did in 1930 with his fascinatingly threatening picture 'Neues Spiel beginnt'. ... - Helmut Böttiger, Deutschlandfunk

"In four not only stylistically brilliant essays, critic and translator Marie Luise Knott [...] considers moments of 1930.[...] She poses painful questions to artistic modernism. Yet she does not bid art farewell into its own spheres, but challenges it to defend the construct of the autonomous individual." - Moritz Reininghaus,Tagesspiegel

"'Dazwischenzeiten' is both an opinionated and insightful book on the Weimar Republic that stays close to its authors by quoting them extensively. Even Brecht's oft-maligned communist didactic play 'The Measure' - also from 1930 - appears in a new light, namely as a possible critique of totalitarianism." - Hans-Peter Kunisch, philosophie magazin