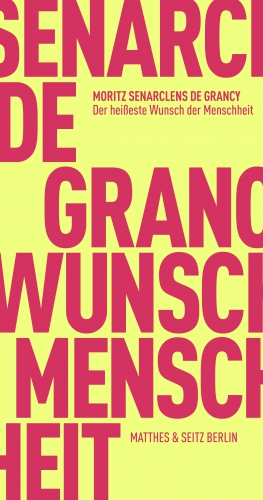 The Hottest Desire of Mankind

"The question of what we can expect from the future is essentially determined by what we believe we have lost," writes Moritz Senarclens de Grancy in his educational essay, referring to a hitherto unnoticed early thesis of Freud's: the "hottest desire of mankind," according to the inventor of psychoanalysis, is to be allowed to do something twice. Behind this is an ambivalent figure who, on the one hand, is intent on approaching a past image by means of repetitions and, at the same time, breaking with it in order to finally become free for the future. In an ingenious twist, Senarclens de Grancy sees the origin of longing in precisely that primordial event behind which there is no turning back: in the expulsion of Adam and Eve from paradise. The desire for the eternal return of the past and our expulsion from paradise form a witty and entertaining web, in which our everyday life is not neglected.

Moritz Senarclens de Grancy, born in Hannover in 1972, is a psychoanalyst in private practice in Berlin. He studied law, art history, and cultural studies and received his doctorate from Humboldt University in Berlin on the role of metaphor in Freud. Since 1999, he has written cultural and professional reviews for print, online, and radio.