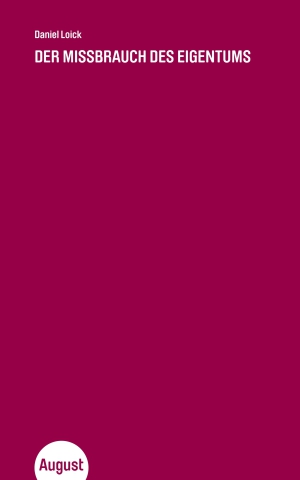 The Abuse of Property

The squatter movement coined the slogan "Better occupy as it is than destroying while owning" (Lieber Instandbesetzen als Kaputtbesitzen). The term "kaputtbesitzen" implies the thesis that property - and property as such and not just an excessive accumulation of property in the hands of individuals - is not a condition but an obstacle to use. Following on from this, the essay attempts a systematic critique of property. The abuse of property, as Daniel Loick shows, has an objective and a subjective side: the legal institution of property deprives objects of their usability by people and it deforms people themselves in such a way that they are no longer capable of a meaningful use of objects. This thesis is explained both by means of a critical reading of classical justifications of property and by reconstructing various relevant critiques of property. In dialogue with Locke and Hegel, Marx and the Franciscan theologians, Loick formulates an eminently political critique of property, which has its paradigm in squatting and is given new impetus by the current discussion of the commons. Property is not, as bourgeois ideology would have it, a condition of use. On the contrary, as Daniel Loick shows, it inevitably produces a specific abuse: of both things and people.

Daniel Loick is a Associate Professor of Political and Social Philosophy at UvA as well as Associated Researcher with the Institute for Social Research (Frankfurt). After receiving his PhD in 2010 from Goethe University Frankfurt, he held positions at multiple institutes in Germany, Switzerland, and the US. In the spring term 2020, he was Max Kade Visiting Professor at the German Department at Northwestern University, Chicago. He currently pursues two research projects, one about legal criticism and abolitionism, and one about subaltern forms of sociality.