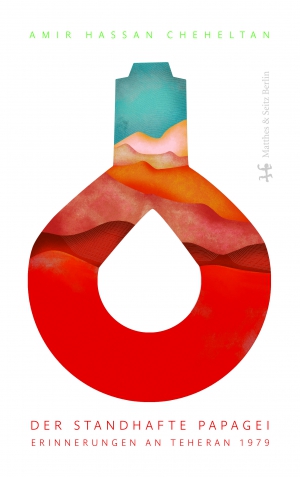 Mr. Firuz, the owner a liquor store in Teheran, is the first to realizes that something big is up. Suddenly, his own son appears in front of the window of the parents’ store as the leader of a marauding gang of adolescents and, literally, throws the first stone. While more and more neighborhood residents join the Basij militia linked to Chomeini, people in front of his store argue with each other, say their prayers, and fire weapons, and at the same time hope grows that something good might rise from the ruins of the overturned monarchy. But the revolutionary forces become increasingly radicalized, and finally they establish the repressive regime. Amir Hassan Cheheltan was 22 years old and a student when the first leaflets which called for the overthrow of the shah appeared on the house fronts. His memories of former neighbors and friends, of anger, chaos, and the daily struggle for normality unclose a panorama of the Iranian society in times of protest, violence, and insecurity.

Amir Hassan Cheheltan was born in 1956 in Teheran Up until today, Cheheltan has brought forward nine novels, six anthologies with short stories, and one screenplay. Besides that, he regularly writes essays and editorials for German and international newspapers.

"Anyone who studies the history of the Iranian Revolution and its aftermath must read Amir Hassan Cheheltan's books." - Niels Beintker, Bayerischer Rundfunk

"Amir Hassan Cheheltan is a bit like [the parrot in the book] himself - he would not endure the re-education to silence." - Susan Vahabzadeh, Süddeutsche Zeitung

"[The] book is a narrative collage drawing from many sources, with a pronounced sense of the surreal juxtaposition and succession of joys and terrors, despair and exuberance, the amusing and the grotesque." - Renate Wiggershaus, Neue Züricher Zeitung

"An impressive must-read for anyone who wants to understand Iran." - Annette König, Swiss Radio and Television

"Knowledgeable and sober, shocking because of the brutality of the events, at times humorous-subtle, very informative background reporting that strives to find the truth." - Claudia Niebel, ekz Bibliotheksservice

"This oscillation between verifiability of political facts and a direct experience linked to individual protagonists is what makes the book so appealing [...]." - Guy Helminger, Luxemburger Tageblatt