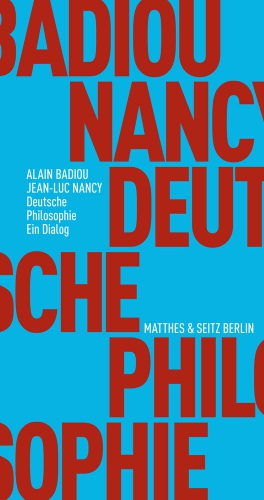 Written in the form of a dialogue, and revised and expanded from a 2016 conversation between the two philosophers at the Universität der Künste Berlin, the book offers not only Badiou‘s and Nancy‘s reinterpretations of German philosophers and philosophical concepts, but also an accessible introduction to the greatest thinkers of German philosophy. Badiou and Nancy discuss and debate such topics as the legacies of Kant, Hegel, and Marx, as well as Nietzsche, Adorno, Fichte, Schelling, and the unavoidable problem of Heidegger and Nazism. The dialogue is contentious, friendly, and often quotable, with strong—at times passionate— positions taken by both Badiou and Nancy, who find themselves disagreeing over Kant, for example, and in unexpected agreement on Marx, for another. As volume editor Jan Völker observes, “German philosophy” and “French philosophy” describe complex constellations that, despite the reference to nation-states and languages, above all encompass shared concepts and problems—although these take a range of forms. Perhaps they can reveal their essential import only in translation.

Alain Badiou was born in 1937 in Rabat. He is a philosopher, an author and an activist. With his concept of "revolutionary events" he is considered as one of the most important philosopher of our time.

Jean-Luc Nancy was born in 1940 in Bordeaux. He is one of the most famous philosopher of the deconstruction. He wrote numerous books dealing with German philosophy and literature. He was professor for philosophy at the arc Bloch University in Strasbourg.