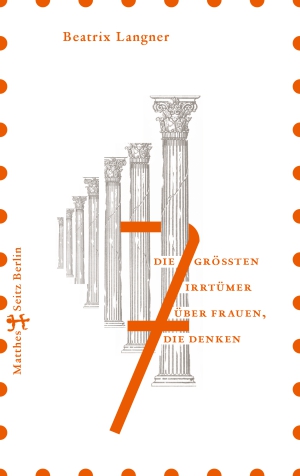 For them wars have been declared, praises were sung, poems were written about them, for them men would throw themselves head first in bankruptcy and death. Women have always dominated men's thoughts. But as soon as women start to think by themselves, they are immediately expelled from the world. Despites decades of emancipation, there is still almost nothing more indecent than a thinking woman. All the more when they are contemplating converting these thoughts into objects of influence, let alone of power. We are still today confronted with publically condemned or idealised thinking women, always presented as exotic or without sexuality.

In her billant and sharp-tongued essay about the seven greatest fallacies about thinking women, Beatrix Langner tells the story of the lockout of feminine intellectual capacities. She also shows that women have had for many years to measure themselves exclusively with masculine thinkers. She asks the awkward question why women have so long been satisfied by playing the part of the Saint, the Muse or the Prostitute to the point that today's prevailing opinion seems to be: Men create works, women just work on themselves.

Beatrix Langner, born in 1950, is a writer and a literary critic living in Berlin. She has lately published a biography about Jean Paul as well as a monography about Adelbert von Chamisso by Matthes & Seitz Berlin.

"Langner doesn't dwell on the current compatibility debate, doesn't ask about equality or difference feminism, but shows the arguments and mechanisms that have prevented women from making use of their intellectual capacities throughout the long history of patriarchy. Absolutely worth reading." - Christa Nebenführ, Buchkultur

"Entertaining, mischievous, detail-oriented, polemical: in order to expose the deceptive maneuvers of male domination and to explore why things didn't go better with thinking women, Beatrix Langner already strikes down the salon culture of Romanticism ('free-wheeling zone for chickens addicted to reading') along with its ideal of love." - Edelgard Abenstein, Deutschlandradio Kultur

"It is an essay written with a seemingly light hand and a great deal of research through human history with its misogynistic and women-restricting constants that have not really been eradicated to this day. Beatrix Langner tells the story of denying or fighting female spirit exceedingly wittily and not uncritically as far as the effectiveness of feminism is concerned. A book worth arguing about." - Annett Gröschner, piqd

"This book is a great pleasure and a great puzzle. Beatrix Langner lets the masculinity of all ages present itself in its misogynistic self-importance. And it's so peppered with it that one is ashamed above all of one's gender, which is apparently not too stupid for such things, however clever it may otherwise pretend to be." - Walter Delabar, Fixpoetry

"One may doubt that the dialectic master and servant has ever been better formulated." - Richard Schuberth, jungle.world