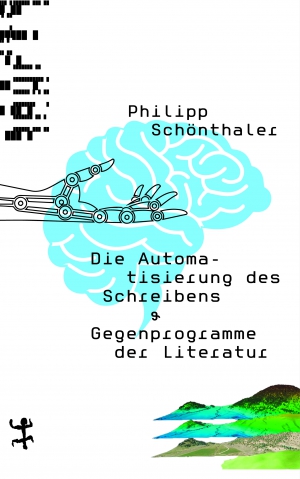 The Automation of Writing and Literature Counterprograms

Experiments with computer-generated texts initially cause astonishment, only to lead to reassured dismissal: Good novels, it is said, are not (yet) written by computers. But against the backdrop of the triumphant advance of artificial intelligence, the history of the mechanization of writing comes into focus. In this large-scale study, Philipp Schönthaler reconstructs how writing and programming relate to each other. His surprising walk through the history of literature opens up a fascinating space of depth for the current discussion, which makes alarmisms as well as promises of salvation questionable. At the beginning of the 20th century, the European avant-gardes translated the modes of production of the Industrial Revolution into new writing techniques, thus laying the foundation for a literature from the spirit of the computer. But computers and cybernetics were already splitting the field of the neo-avant-gardes. Simultaneously with the first texts produced on computing devices, they develop ways of writing a non-programmable literature. They make it clear that writing and programming are linked to different self-determinations and modes of world development. In view of automation as a global principle, "The Automation of Writing" shows literature as a counter-draft to a reality that can be modeled algorithmically and to which there are seemingly no limits. Literary writing can only meet this challenge, however, if it accepts the omnipresence of the digital.

Philipp Schönthaler, born in Stuttgart in 1976, received the Clemens Brentano Prize in 2012 for his narrative debut Nach oben ist das Leben offen. He lives in Berlin.