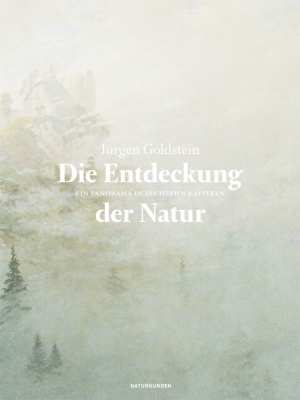 The Discovery of Nature

A History of Nature Perception

The Discovery of Nature is a track record, which dates back to the 14th century. Jürgen Goldstein paints a colorful panorama in 16 chapters: starting with Petrarcas Mont-Ventouxadventure, he goes on and follows Georg Forster during his Tahiti trip, stays with Georg Christoph Lichtenberg at his crossing to Helgoland and finally tells the story of Reinhold Messner‘s ascent of Mount Everest. On the basis of eight ascents and 8 crossings of horizon by ship Goldstein exposes a development curve, which goes from the timid pleasure of looking, via the spectacular nature adventures through to nowadays weariness of watching. Jürgen Goldstein spins a dense, almost literary novella from the historical reports. By letting such brilliant writers like Goethe, Darwin, Claude Lévi-Strauss and Peter Handke speak for themselves, he manages to rehabilitate the story as a form of knowledge. What unites these travel diaries, letters, notes and stories is their love for the world.

Jürgen Goldstein, born 1962, is a full professor for Philosophy at the University Koblenz-Landau. Inspired by Hans Blumenberg his studies explore the genesis and the profil of the modern age. His books deal with the emergence of modern subjectivity and rationlity, the political philosophy of 20th century and the history of nature perception.

»Jürgen Goldstein leads you through the universe of the bravest natural scientists in history. This educated book will tickle your brain cells.«
Annemarie Stoltenberg, NDR Neue Bücher

»Goldstein turns the heroism of peakclimbing into an introspective, like Augustine once praised them in his Confessions. […] Because of this tension, The Discovery of Nature becomes a book, which is pretty rewarding.«
Cord Riechelmann, Süddeutsche Zeitung

»For philosopher Jürgen Goldstein it is just about time for a new curiosity for nature […]. He is not talking about extremes, about faraway places, but about the nature that surrounds us, about the nature we think we'd know, we even think of as domesticated, which is still good for surprises – and for a new appreciation.«
Ursula Daalmann, WDR 5

»Goldstein's history of nature reflection delivers more than an unconventional chronicle of geographic discoveries, which were made at new frontiers and fist-time climbed summits. […] The narraitve elements document how the human self-conception has also changed due to the perception of nature […]. His book Discovery of Nature also becomes to an exploration of humanity with narrative parts.«
Matthias Glaubrecht, Die Welt