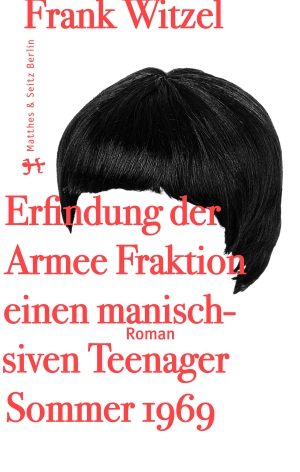 Genre: Fiction, Literature, Literary Novel
"This is not a seasonal product. This is a novel with a long-term effect." - Helmut Böttiger, Süddeutsche Zeitung

Gudrun Ensslin an Indian squaw made of brown plastic and Andreas Baader a knight in shining black armour? The world of the child narrator of this rousing novel, which resurrects the cosmos of the old FRG, is no less real than the political events that kept those years in suspense and on which the 13-year-old makes his very own rhyme. In this large-scale fantastic literary reconstruction of the western part of Germany, Frank Witzel has succeeded in building a hall of mirrors of history in the mind of an adolescent. Memories of post-war Germany, premonitions of the German Autumn and reflections on the present day take him further and further away from his environment. The dense narrative fabric is an explosive mixture of stories and history, world explanation, reflection and fantasy: a detail-obsessed kaleidoscope of moods from a world that, like the GDR, became history in 1989.

"Hardly any novel in recent years has placed form and content in such a compelling relationship as Frank Witzel's opus magnum. A clever and ambiguous novel on the knife edge of a political rupture."
- Nicole Henneberg, FAZ