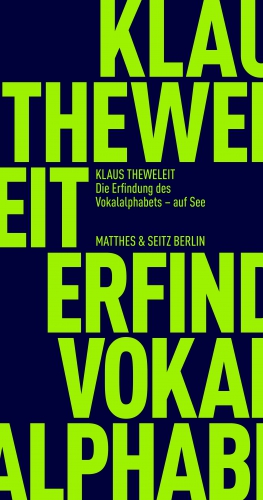 The invention of the vowel alphabet - at sea

Who invented it, the vowel alphabet? Did it come south from the Danubian culture, did the Phoenicians bring it with them on their trade routes, or does it have its roots in the Semitic languages of the Near East? Was it even Homer who created it single-handedly when he wrote the Illiad and the Odyssey? What is clear is that around 800 B.C. the vowel alphabet became established, starting from the eastern Mediterranean. In many cultural theories, literacy and democratization are closely linked:
The massive reduction of the necessary signs with an enormous expansion of what can be expressed with them represents in them a turning point of history. Precisely and aggressively at the same time, Klaus Theweleit picks up the threads. The vowel alphabet, according to his speculative reconstruction, is an invention of Greek traders and pirates who could no longer steer towards a fixed home port. On stormy seas, the vowel simply carries better. Memorized in the verse form of hexameter, epics became the central means of communicating belonging. "The Invention of the Vowel Alphabet - at Sea" is a fast-paced journey to the origins of European culture.