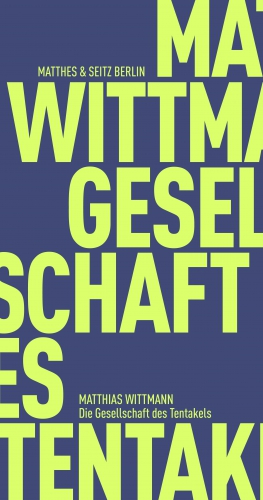 The Society of the Tentacle

The skeleton-less octopus is a virtuoso of ambiguity, sand in the gears of an administration that tolerates no ambiguity. Its outlandishness makes the octopus unpredictable as a ceaseless deviation - even from itself. In this extraordinary essay, the figure of the tentacle serves both to analyze and criticize the existing and to counter-design a not-yet. In the unfolding dialogue between the octopus figures in zoology and mythology, media and cultural theory, phenomenology and political philosophy, as well as film, literature, and art history, surprising turns occur, from whose grasp the octopus repeatedly escapes in order to play out forms of epistemic disobedience that ultimately arrive at a new social contract based on the recognition of defenselessness and vulnerability. Matthias Wittmann illuminates blind spots of our society and establishes with the octopus a figure of our crisis-ridden present as well as a figure of the disruption of human orders of knowledge.

Matthias Wittmann, born in Vienna in 1976, is a media theorist, writer and curator as well as a literary and film critic. He received his PhD in media studies in 2013 on the topic MnemoCine. The Construction of Memory in the Experience of Film. 2009-2019 he researched and taught at the Seminar for Media Studies at the University of Basel, focusing on film, screenology, medial mnemographies, and transcultural image research (esp. cinema of Iran). In 2021 he was a visiting professor at the University of Vienna (theater, film, and media studies).