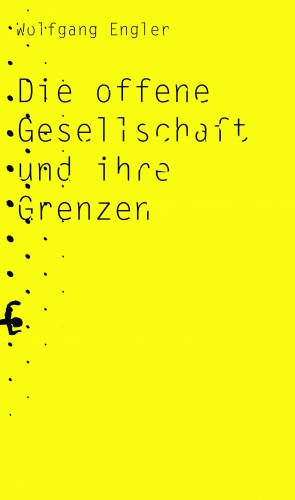 The Open Society and its Limits

Genre: Philosophy, Politics, Sociology, Essay, Nonfiction
A relentless analysis of the current loss of reputation of our open society

In 1990 the „open society“ in Europe won a terrific victory with the fall of the Eastern Bloc. The vision of society conceived by the philosopher Karl R. Popper now seemed to become reality everywhere. Its advantages were obvious and groundbreaking in view of the experience of dictatorship and economic decline. Today, only 30 years later, the liberal, democratic, market-based society has lost much of its glamour and appeal, its institutions seem hollow, authoritarian tendencies are gaining ground everywhere. Using Popper‘s tool, Wolfgang Engler reconstructs the social conditions and historical developments that led to the crisis of Popper‘s model. The upheavals in Eastern and Central Europe in 1989/90 postponed this change of perspective. The newly won freedoms were celebrated and their limits were wordlessly concealed. This meant a misjudgment of the real power relations as well as the problems and shortcomings of open societies - which, as in the Corona Pandemic, are closing more and more often. It is necessary to dissolve these blockades of thought analytically - with Karl R. Popper, against Popper, beyond Popper.

Wolfgang Engler, born 1952 in Dresden, studied philosophy at the HU Berlin and works as a freelance journalist. From 1992 to 2005, he taught cultural sociology and aesthetics at the Ernst Busch Academy of Dramatic Arts in Berlin, where he also served as rector from 2005 to 2017. An expanded and updated new edition of his 1999 work „Die Ostdeutschen. Kunde von einem verlorenen Land“, for which he was awarded the prize „For outstanding achievements in the field of the public effectiveness of the subject“ by the German Sociological Association in 2019.