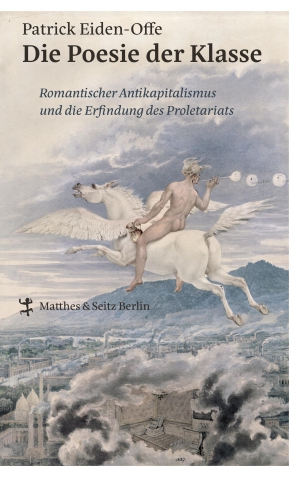 The Poetry of the Class

Romantic Anti-Capitalism and the Invention of the Proletariat

With the establishment of capitalism and industrialization in the early 19th century, a new social collective emerged from impoverished artisans, urban rabble, wandering rural lower classes, bankrupt aristocrats and, last but not least, released precarious intellectuals, which would soon be called the proletariat in the language of the time. However, this did not yet exist as a formed, homogeneous class with affiliated political parties, which would prescribe the way to a better future. The motley appearance, the dreams and longings of these figures, torn from all class certainties, found new forms of narration in romantic novellas, reportages, social-statistical studies, monthly bulletins. But soon enough, disorderly, violent, nostalgic, errant, and utopian as they were, they were denigrated as reactionary and anarchic by the masterminds of the labor movement because they would not fit into the grand linear vision of progress. In his groundbreaking study, Patrick Eiden-Offe helps long-repressed Romantic anti-capitalism come into its own and liberates nineteenth-century social and literary history from its one-dimensional lines of sight. In the process, it becomes clear, not least, that the historical, poetically sung about disorderly class is strikingly similar to today's figures of precarity after the end of the old labor society.

Patrick Eiden-Offe, born 1971, is a literary and cultural scientist. In 2008 he received his doctorate at the University of Konstanz with a thesis on Reich fantasies in the poetic and political work of Hermann Broch. His areas of expertise are the intertwining of literature, economics and politics, Robert Walser, the relationship between literature and ethnology, and romanticism. Since 2017 he has been researching the theory formation of the young Georg Lukács at the Center for Literary and Cultural Research (ZfL) in Berlin.

"Patrick Eiden-Offe's original book convincingly portrays how poetry was exorcised from the German workers' movement - at least officially [...] Rarely has a gap in research been filled with so much esprit, with the result that men's choral societies and arborists suddenly appear in a very different light." - Judith Leister, SWR2

"[Patrick Eiden-Offe] writes the story of a different, dissident workers' movement that is becoming topical again today in the time of a growing colorful precariat." - Helmut Petzold, Bayern 2

"One of the most brilliant new publications in literary studies of 2017 [...] " - Marcel Lepper, History of German Studies

"Taking the past and reassembling it so that it is relatable for today: romantic anti-capitalism." - Lennart Laberenz, Der Freitag

"Critically questioning the role and appearance of contemporary literature, Eiden-Offe's 'social history with a sense of possibility' provides manifold approaches. To tell of the social impositions today, respectively their deliberate exclusion from the thematic circle of German literature, in dismissal and negation, can alone be part of a 'poetry of class'." - Enno Stahl, Jungle World

"[...] Where it is about the invention of the proletariat, and in a very tangible sense." - Christian Demand, Deutschlandfunk

"With this book [there is] a source-saturated, vividly descriptive study that boldly expands the historical debate and provides fuel for the political discussion. [...] The sovereign style makes one forget that the source corpus dates from the first half of the 19th century. The poetry of the class deserves its attention." - David Bebnowski, Labor Movement History

"This readable book's attempt to 'rescue' the legacy of romantic anti-capitalism is bold and stimulating." - Michael Löwy, Das Argument