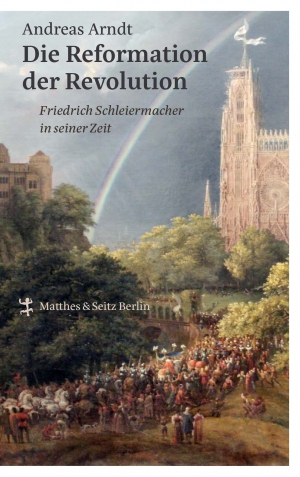 The Reformation of the Revolution

As the emblematic offspring of the Protestant Church, Friedrich Schleiermacher typifies the cultural heyday of Protestantism during which a new form of cultivated inwardness and subjective religiosity emerged. Andreas Arndt takes a new look at Schleiermacher‘s way of thinking and puts it into the context of the political and social events of his time. In doing so, he traces his intellectual development, locates it in his altering positioning on the Prussian state and reconstructs his social-political concepts in response to the great historial upheavals, namely the French Revolution, which Schleiermacher considers to be an event of religious significance. He associates it to the idea of a realm of freedom which unites the humankind. For his 250th birthday, Andreas Arndt presents Schleiermacher as a thinker between liberality, response and utopian critique.

Andreas Arndt, born in 1949, was most recently professor at the theological faculty of Humboldt University in Berlin. He is co-editor of the critical complete edition of Schleiermacher‘s works, honorary chairman of the International Hegel Society and has published numerous studies on classical German philosophy and on the history and theory of dialectics.