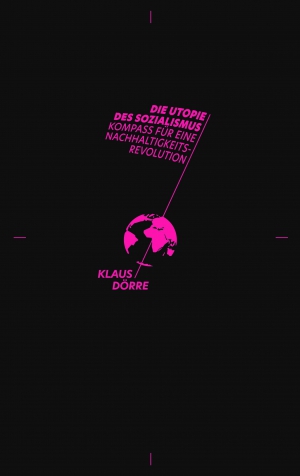 The Utopia of Socialism

Compass for a sustainability revolution

Genre: Politics, Essay, Nonfiction
A compass for the next society, dedicated to the currents critical of capitalism in the global climate movements

A society can only be sustainable if it breaks the compulsion for ever new land grabs that is inherent in capitalist ownership as a structural principle. A society that overcomes this expansive principle in a democratic way must be a socialist one, Dörre argues in this fundamental book.
In order to regain radiance, however, socialism must move away from its dogmatically ossified claim and once again become an attractive utopia. The content of this utopia can no longer be the liberation of the productive forces from the fetters of inhibiting production relations. The socialism of the 21st century, which reflects and thinks along with its own history and its manifold failures, stands for the search for an emergency brake that brings the train speeding toward an abyss to a halt. But there is still time to set the course in such a way that other ways out of the epochal economic-ecological pincer crisis become possible. At the center of Dörre's conception of society is a fundamentally changed relationship between society and nature, which incorporates feminist, ecological and also indigenous currents of thought critical of capitalism.

Klaus Dörre, born in Volkmarsen-Külte in 1957, has been professor of sociology of labor, industry and economics in Jena since 2005. He is a founding member of the Institute for Solidarity in Modernity, a member of the scientific advisory board of Attac, and co-editor of the "Berliner Journal für Soziologie," among other publications. Together with Stephan Lessenich and Hartmut Rosa, he founded the collegial research group Post Growth Societies. In 2021, Klaus Dörre received the Thuringian Research Award.