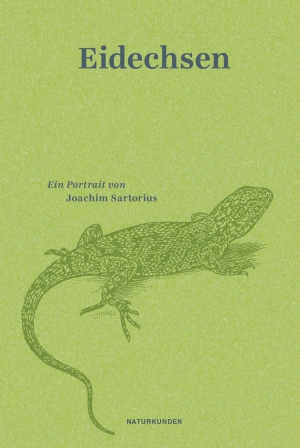 Genre: Nonfiction, Nature Writing, Nature, Essay
The smaller the lizard, the greater its hope of becoming a crocodile.

Joachim Sartorius fell for the world's most vigilant animal as a child in Tunis; for him, the lizard became a cipher for the south. Under the spell of their fixed, unblinking gaze, their tongues, their razor-sharp egg teeth, their clawed toes and their iridescent coloring, he is touched by the breath of a primeval world inhabited by dinosaurs and dragons. By telling of the glorious diversity of lizards as natural beings and symbolic creatures, he ignites a veritable lizard fever for the impenetrably alien creature with the cold blood. With his passionate plea for protected zones for the reptiles, he ultimately guides the lizard onto Noah's Ark, where it once found no place.

Joachim Sartorius, born in Fürth in 1946, grew up in Tunis and now lives in Berlin and Syracuse after long stays in New York, Istanbul and Nicosia. He has published eight volumes of poetry that repeatedly deal with the Levant and its cultures. In 2019 Sartorius received the August Graf von Platen Literature Prize.

"With 'Lizards' Joachim Sartorius has succeeded in writing a book about these so fascinating animals that is as inspiring as it is entertaining." - Dirk Kruse, Bayerischer Rundfunk