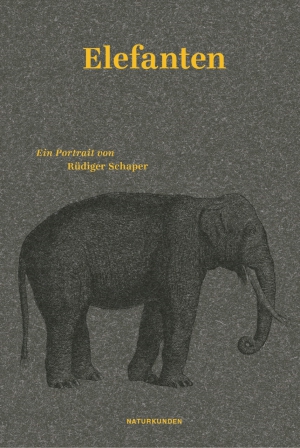 Genre: Nature, Nature Writing, Essay, Nonfiction
Lovingly and with astonishing insights, Rüdiger Schaper portrays the largest land mammal in the world, which is also one of the gentlest.

Elephant history is human history - and vice versa. For humans, the heaviest land mammal is everything at once: status symbol and meat reservoir, tool of war and workhorse, raw material resource and entertainer, trophy and dream image, monster and mascot. With their gentle, but also irritable nature, their mighty mass on columnar, yet silent legs and their centimeter-thick to paperthin skin, elephants unite the contradictions of life within themselves. In his portrait, which is as tender as it is illuminating, Rüdiger Schaper follows the twisting and turning paths of real and imaginary proboscideans through cultural and natural history, floats in Thailand, rocking on an elephant in the air and leaves - the animals displayed as sensations - no doubt that it is we who can learn from the elephants, and not the other way around. „There is something tremendously liberating about dealing with elephants: It throws you powerfully back on yourself.“

Rüdiger Schaper, born in Worms in 1959, moved to the Tagesspiegel in 1999 after years of working as a cultural correspondent for the Süddeutsche Zeitung. In 2005 he took over the management of the Feulliton. In addition to numerous articles with a focus on the performing arts and the 2014 edition of Spektakel. Eine Geschichte des Theaters von Schlingensief bis Aischylos, he published biographies on Harald Juhnke, Konstantin Simonides, Karl May and most recently Alexander von Humboldt. He lives with his family in Berlin.