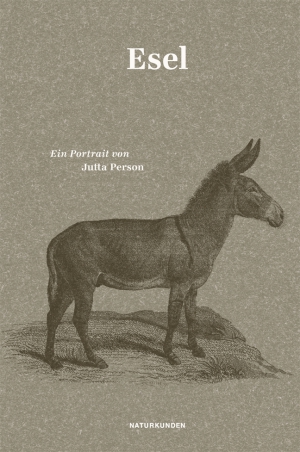 Stubborn, dumb, wayord and horny–the features that are attributed to donkeys are not quite flattering. Yet still, almost no animal plays such a prominent role in cultural history. Jutta Person tells the astonishing story of this fascinatign beast of burden and undertakes a characterology of donkeys. She meets donkey breeders and portraits domesticated and wild jackass types. Last but not least she shows us how smart these allegedly dumb animals with pretty eyes are–and how much we can learn from them.

Jutta  Person was  born  in  1971  and  works  as  a  journalist  in Berlin.  She  studied  German  and  Italian  Literature  and  Philosoph in Cologne and Italy. She now writes for the Süddeutsche Zeitung, Literaturen, Die Zeit and the Philosophie Magazin.

"Everything is in its place here. [...] If one can trust a publishing program so much in terms of seriousness, splendor, taste, intelligence, then I wish one could subscribe in advance and not learn anything about the books beforehand. They would come as surprise packages and the contents would be so amazing every time that you wouldn't believe it." Andreas Maier, Die Zeit

"There was no donkey in the stable at Bethlehem by chance: Jutta Person's little cultural history saves the honor of an animal often misjudged as a "flawed horse."" Eckhard Fuhr, Die Welt

"The happiness of the earth lies on the back of the donkey: everything about this misunderstood creature, entertainingly and cleverly told, furthermore animalistically great designed by Judith Schalanksy - iaaah!!!!." Alexander Camman, Die Zeit

"A clever portrait of mild-mannered rebels. The author achieves a feat. She dives deep into literature, art and philosophy, but without losing sight of her subject, the donkey as a living being." Günther Wessel, Deutschlandradio Kultur

"Jutta Person succeeds with impressive sensitivity in following the donkey's branching cultural and natural histories. She begins with reflections on the donkey's physiognomy and "character head" before describing a visit to sixty donkeys in the Swabian Alb ... The slim volume, a real gem in pictures and text, closes with some portraits of donkey species." Thomas Macho, NZZ

"In her cultural history of the donkey, [Jutta Person] follows the dazzling career of a farm animal that throws its tamers into confusion." [n.d.], Philosophy Magazine