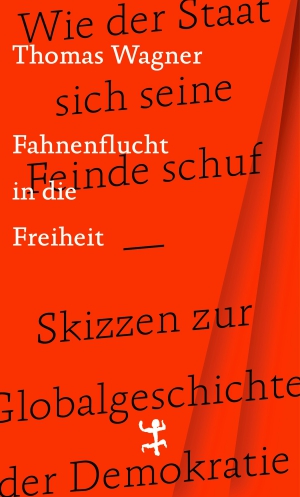 Desertion into freedom. How the State Created Its Enemies - Sketches on the Global History of Democracy

Genre: Politics, Essay, Nonfiction
A radical revision of the history of democracy and a plea for political imagination

Immanuel Kant defined anarchy in 1798 as "law and freedom, without violence". This is at first only a possibility of thought that seems to have little to do with the world we live in. But it is supported by a vote with the feet, which in the history of mankind has remarkably often turned out against life under domination. Thomas Wagner's radical revision of the history of democracy follows these feet along their many paths. Until well into modern times, a large part of humanity also lived in societies without a state because they wanted to escape the grasp of the rulers. Tales of the unbound life of "noble savages" and "Amazons", freebooters or Bedouins, however, also stimulated the political imagination of those all over the world who had to continue living in bondage. The idea of political freedom by no means originated in Europe alone. Fahnenflucht in die Freiheit makes this realization the starting point for the urgent decolonization of political thought. It is an invitation to pick up the fascinating trail and follow it further.

Thomas Wagner, born in Rheinberg in 1967, is a cultural sociologist and author of numerous books.