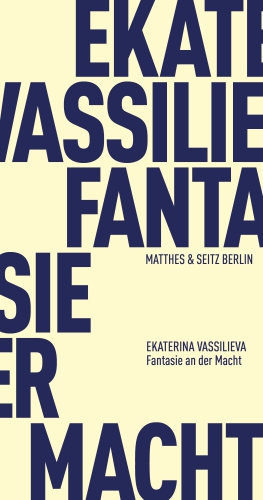 Fantasy in Power. Literary and Political Authorship in Contemporary Russia

It is not censorship that characterises Russia today, but an authoritarian power relationship of a newer type. Politics has made use of the lessons of postmodernism and designs its own omnipresence as a post-ideological synthesis of the arts so comprehensively that it can make oppositional aspirations its own. This literarisation and poetisation of the political has taken place insidiously, and the analysis of recent political developments in Russian statehood must now be done through the means of aesthetics. Ekaterina Vassilieva scrutinises conservative authors as well as those who represent an emancipatory and critical position. What they all have in common is that they use aesthetic means to intervene in the political and achieve a social effect through their works. Hope shimmers in poetry - the genre that remains committed to a critical tradition as well as in a constant movement of innovation, showing that a multi-voiced, emancipatory speech is possible.

Ekaterina Vassilieva, born in Leningrad, did her doctorate in Cologne on postmodernist Russian literature. Her dissertation The Motif of the Penal Camp in Postmodern Russian Literature. Dovlatov, Sorokin, Makanin was published in 2014. As a literary scholar, she researches contemporary Russian culture.