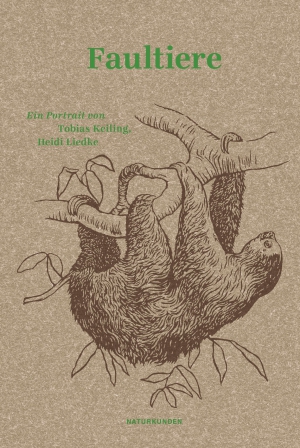 Genre: Nonfiction, Nature Writing, Nature, Essay, Picture Book
An amazing cultural history of the animal that holds up a mirror to our society

Everything about this animal seems to be a statement: it spends most of its life hanging in trees, can hardly be spotted in the foliage with its fur inhabited by greenish algae, and carries out everything necessary for life so slowly that it has always provoked crass rejection in humans. It is lazy, claims its name in several European languages, "ugly," judges Hegel, "deficient" Buffon. Like hardly any other animal of the so-called New World, it confuses categories and seems to be constantly smiling about it - with a thoroughly human-like face. Only the present finds in the sloth the symbol for a decelerated life and for criticism of capitalism.
Tobias Keiling and Heidi Łucja Liedke follow the furious influence of the sluggish animal on European moral philosophy, natural and cultural history - from the time of the first mentions in the 16th century to the megatherium fashion of the 19th century to ramifications reaching far into the present, from which the sloth looks at us supposedly sleepily: It is up to us to look closely.

Tobias Keiling, born in Düsseldorf in 1983, studied philosophy, sociology and law in Freiburg, Basel and Paris. Doctorate in philosophy, research stays in Boston and Oxford. Research assistant at the Institute of Philosophy at the University of Bonn. Research interests include phenomenology and philosophical hermeneutics, history of philosophy in the 20th century.

Heidi Łucja Liedke, born in 1987, studied English, American studies, psychology, and literary theory in Freiburg and New Haven, and received her PhD in Freiburg in 2016 after research stays in Oxford and London. She is a research assistant in English Studies at the University of Koblenz-Landau and focuses on Victorian (travel) literature and contemporary British theater, also as a reviewer for publications such as Theatre Journal and Shakespeare Bulletin.