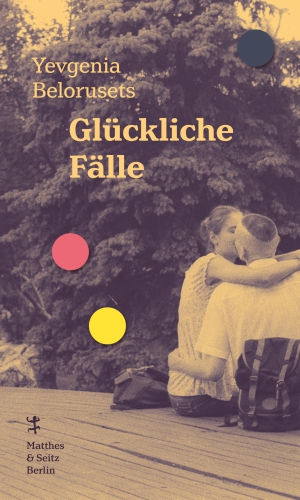 Out of the impoverished coal regions of Ukraine known as the Donbass, where Russian secret military intervention coexists with banditry and insurgency, the women of Yevgenia Belorusets’s captivating collection of stories emerge from the ruins of a war, still being waged on and off, ever since the 2014 Revolution of Dignity. Through a series of unexpected encounters, we are pulled into the ordinary lives of these anonymous women: a florist, a cosmetologist, card players, readers of horoscopes, the unemployed, and a witch who catches newborns with a mitt. One refugee tries unsuccessfully to leave her broken umbrella behind as if it were a sick relative; a private caregiver in a disputed zone saves her elderly charge from the angel of death; a woman sits down on International Women’s Day and can no longer stand up; a soldier decides to marry war. Belorusets threads these tales of ebullient survival with a mix of humor, verisimilitude, the undramatic, and a profound Gogolian irony. She also weaves in twenty-three photographs that, in lyrical and historical counterpoint, form their own remarkable visual narrative.

Yevgenia Belorusets is a Ukrainian photographer who lives between Kyiv and Berlin. Fortunate Fallings is her first novel.

"Full of humour are the prophetic-absurd stories of these Ukranian women these mythological beings of everyday life. Belorusets lets the visible and the invisible swap places here - even the war has hidden in the park. Political theories, the Beckett absurdity of post-Soviet consciousness merge here into a unique voice unheard before." - Katja Petrowskaja

“In documenting the bizarre twists and fragmentary turns inherent throughout thesestories of loss and trauma, Belorusets draws on the grotesquerie of Nikolai Gogol’sfantasies and the absurdist gallows humour of Daniil Kharms, whose hauntingvignettes responded so well to the terror and seeming unreality of life in the SovietUnion. Yet against the present and looming risk of a Russian invasion of Ukraine,these combinations produce an especially unsettling awareness of the myriad ways inwhich imagination walks hand in hand with violent reality.” The Financial Times

“Belorusets’s stories work their way under your skin. A tender strength and Gogolian wryness emerge from “insignificant, trivial things”, like the inability to let go of an umbrella. Their inconclusive endings have a Chekhov-like knack of stepping off the page into a shifted new plane of survival and real, bewildered life.” The Times Literary Supplement