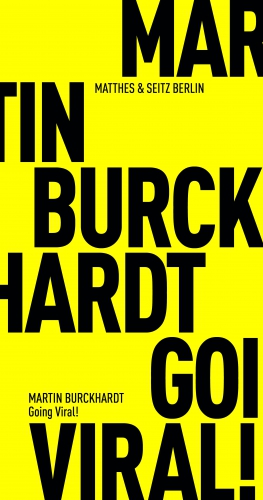 Martin Burckhardt‘s essay Going Viral! follows on from the programmatic attempt he wrote together with Dirk Höfer to interpret Boole‘s x = xn as the driving force behind the new order of things. If Everything and Nothing was a meditation on symbolic virality, Burckhardt now goes a step further and postulates a pandemic-induced end of the postmodern postmodern phantasm, right into the abyss of history. If Wittgenstein once said "The world is what the fall is", the fall can be interpreted as a collision with the reality principle. Or more precisely: as the realization that the traditional language and and social games are no longer able to carry the day. As a stowaway of the global commodity chains and travel movements, the pandemic is proving to be the evil twin of the network society, which, with its call of "Going viral!" has fundamentally changed industrial societies, and which is now emerging from its underground. As a behemoth? Or not: as an alien portrait of ourselves?

Martin Burckhardt, born in Fulda in 1957, is an author and cultural theorist and lecturer. He has written various books on the genealogy of the machine in the philosophy of technology. He lives and works in Berlin.