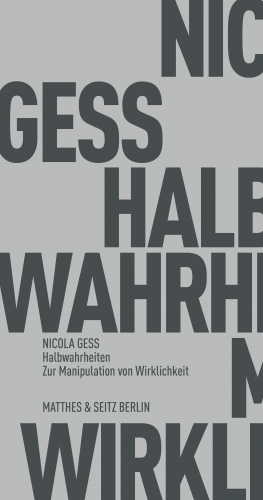 Half-truths are among the most conspicuous and effective instruments of so-called post-factual political discourse - a discourse that vacillates between relativism and cynicism and for which the transformation of facts into mere opinions is just as typical as the quest for attention and the demonstration of authoritarian setting power. Whether fake news, conspiracy theories or populist propaganda: they all cannot do without half-truths and their manipulation of reality. In her book, Nicola Gess puts the half-truth in conversation with the concept of ideology and formulates a theory of the half-truth as a narrative microform that does not function according to the binary code true/false, but rather credible/incredible. Using the example of the fallen journalist Claas Relotius, the conspiracy theorist Ken Jebsen, and the writer Uwe Tellkamp, she examines how a rhetoric of half-truths and why it can be better countered with a "fiction check" than with a "truth check".

"Half Truths demonstrates what literary studies, sometimes declared obsolete in the competition between disciplines, is capable of in these politically heated times." - Gregor Dotzauer, Der Tagesspiegel

"Rarely has a clarification of terms in literary studies so invited self-examination." - Gustav Seibt, Süddeutsche Zeitung