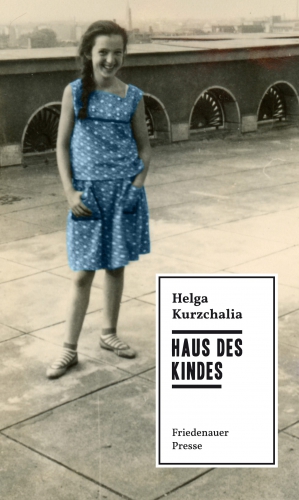 The House of the Child

The House of the Child, designed by Hermann Henselmann as a residential and children's department store, was located at the entrance to what was then Stalinallee. Life there is the starting and crystallization point of an episodically narrated novel that begins before June 17, 1953 and ends in 1965.
When the communist parents of the narrator return to Germany from English emigration after the end of the war, they soon move with their children into the impressive building on today's Strausberger Platz. Through the girl's eyes, we meet her neighbors Hermann and Irene Henselmann, Robert and Karin Havemann, the writers Alex Wedding, F. C. Weiskopf and Bodo Uhse. They all share a belief in a different Germany. But the girl also gets to know her peers. For example, the boy next door, whose parents were deported to the Soviet Union after the war and whose mother will later flee to the West. Or her school friend Gilda, who grows up in an old apartment building behind Stalinallee as if in another cosmos, and the orphaned Zsuzsa, who was transplanted from Hungary to Berlin after the 1956 uprising and comes to visit the child's house. After a few years, the first tiles fall from the facade onto the street, and clear cracks also appear between the residents. The protagonist experiences the contradiction between her privileged situation and the outside world, between Stalinallee and its side streets, whose reality of life often seems to penetrate with difficulty to the adults around her. Their present is too much determined by their own history of persecution and an idealized vision of the future full of deception and self-deception. The narrator has to reassure herself of reality again and again, as if she were living in an illusory world: What is real, what is imagined, and why must something be constantly concealed?
With "Haus des Kindes" Helga Kurzchalia has created a literary search for clues that combines documentary accuracy with narrative originality.

Helga Kurzchalia, born in Berlin in 1948, studied psychology at the Humboldt University in Berlin and has worked as a psychotherapist for many years.