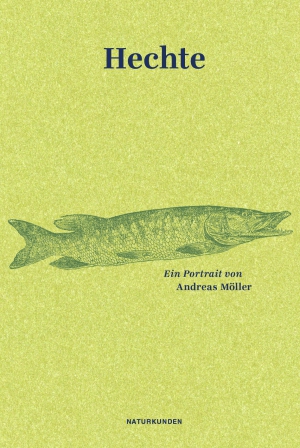 Genre: Nonfiction, Essay, Nature Writing, Nature, Picture Book
The fish of the hour: Hardly affected by climate change, the pike is proving to be an astonishingly robust species that has always held a great fascination for humans

It has been called the "water devil" and the "embodiment of evil and mischief". The allusions to the largest and most dangerous predatory fish of our latitudes are as manifold as they are deceptive. Henry David Thoreau paid tribute to it, as did Vladimir Putin, who poses with pike as an expression of strength and virility. But the pike is also a symbol of a lively, popular sense of humor: when there's a draught like pike soup, you'd better close your windows and doors, and a great pike is a peppy guy who gets to his destination with chutzpah. Andreas Möller traces the reasons for this ambivalence in his ravishing portrait. He shows the pike as the great loner of our waters, which consistently refuses industrial exploitation like no other edible fish. Pike catches are always individual and chance catches that cannot be calculated. Pike is a is a gripping and poetic portrait, richly peppered with cultural-historical observations on fishing, on everyday photography or on the preparation of pike heads. But it is also a plea for the concrete and vivid experience of nature and the reverent feeling of natural beauty.

Andreas Möller, born in Rostock in 1974, was a journalist at Deutschlandfunk Kultur, headed the political consultancy of the German Academy of Science and Engineering (acatech) and is now head of communications at the mechanical engineering company Trumpf.