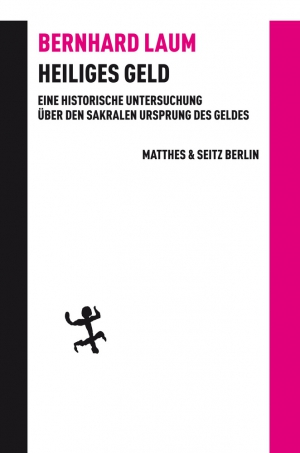 A Historical Investigation into the Sacred Origin of Money

Holy Money is the long out-of-print study that for the first time, and to this day unrivaled in its wealth of sources and ideas, explores the theory of the religious origin of money and its extra-economic significance. In it, twenty years after Georg Simmel's philosophy of money, the scholar of antiquity and economic historian Bernhard Laum comprehensively develops the idea that money developed out of a kind of "religious trade" and that any reflection on the phenomenon of money only makes sense if it traces its history. He finds the birth of money in the cult of sacrifice, examines premonetary forms of money, and the nature and origin of coinage. He proves that money is a "creature of the legal order" and that the payment property of money is older than its medium of exchange function. "Step by step, Laum develops his story, which sometimes reads like an archaeological detective novel: one layer after another is peeled away until finally a chain of events becomes visible, all of which together bring about what can probably be called the grand illusion of modernity." (Christina von Braun).

Bernhard Laum, born in Velen in 1884, studied archaeology and classical philology before working for the German Archaeological Institute. After his habilitation, he taught classical studies and, from 1920, economics in Frankfurt am Main. From 1923 he taught philology and archaeology in Braunsberg and in 1936 moved to the University of Marburg as professor of social and economic history, where he worked until his retirement in 1953. He died in Marburg in 1974.