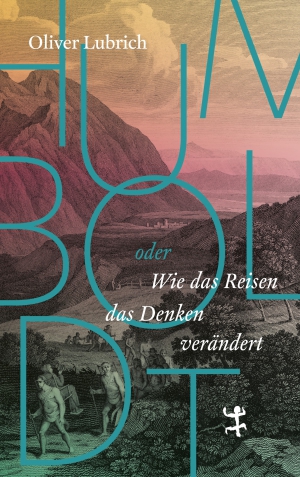 or how travel changes the way we think

Genre: Humanities, Philosophy, Biography, Nonfiction
Alexander von Humboldt: One Who Set Out to Explore the World and Became Another in the Process

From 1799 to 1804, Alexander von Humboldt travels to and through America, later to Russia and to the border of the Chinese Empire. What accompanies his travels is writing. From his published, but also unpublished writings, Oliver Lubrich's investigation creates a picture of the traveler himself: curious and, despite prejudices, always ready to test precisely these on his surroundings. This is what makes his notes so explosive to this day: they are the testimony of a science that tries to get as close to the world as possible, to report on it as accurately as possible, and to make even its own failures productive at all costs. While Humboldt changes knowledge about the world in the name of research, the world he discovers also changes him: there is the failed ascent of Chimborazo, the insurmountable rocky gorge that is reflected in the text in a mad process. There is the Orientalism and the anticization of overseas cultures-experienced that Humboldt deconstructs. And there is the censorship of his writings in czarist Russia, which forces him to find covert forms for the narrative of a journey under political pressure that are red-hot. More and more, Humboldt appears not only as a writer, but also as a written man. In each book he ventures a different design to convey objectivity and subjectivity anew. His intellectual biography shows that the greatest gain in knowledge lies in change itself.

Oliver Lubrich, born in Berlin in 1970, is a professor of comparative literature at the University of Bern in Switzerland. He is the editor of numerous works by Alexander von Humboldt and has also published numerous studies on the testimonies of international authors from National Socialist Germany.