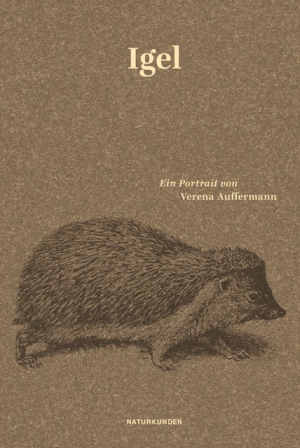 Who does not know them, the smacking-puffing sounds in the foliage - and the as wondrous as defensible ball that causes them? And who doesn't know the desire to do the same as the hedgehog and, if need be, to pull thousands of spikes over his head like a hood? The hedgehog is a shy but convincing hero who outwits hares, inspired Greek philosophy and has been trundling around this planet with short legs for millions of years.
Verena Auffermann follows the trail of the two-faced, sometimes aggressive maverick with fluffy belly and prickly back: from the cave paintings in Lascaux to Tolstoy, Dostoevsky and the Mecki hairstyle to Japanese hedgehog crawl cafés - and discovers the vulnerable spot of little Achill - it is the increasingly warmer winters and the increasingly dry earth that threaten the survival of the prickly animal, which is as popular as it is shy.

Verena Auffermann, born in Höxter, became known after an apprenticeship in bookselling and the study of art history, in addition to her work as a lecturer and editor, primarily as a critic for DIE ZEIT and Süddeutsche Zeitung, among others. She is also active as a juror, moderator and lecturer. Numerous publications followed, most recently in 2009, a literary anthology entitled 100 Women Writers in Portraits. Von Atwood biss Sappho, von Adichie bis Zeh will be published in an expanded new edition by Piper in the fall of 2021. In 2016, Verena Auffermann published a pictorial biography of Henry James.