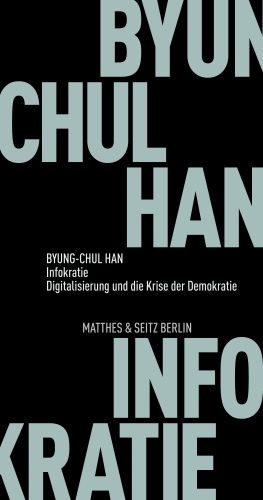 Digitization and the Crisis of Democracy

Digitization is advancing inexorably. We are dazed by the communication and information frenzy. At the same time, we feel powerless in the face of the tsunami of information that is unleashing deformative, destructive forces. Digitization is now also taking hold of the political sphere and causing massive distortions in the democratic process. Election campaigns as information wars are being waged with every conceivable technical and psychological means. Social bots, the automated fake accounts in social media, spread fake news, agitation and hatred and influence the formation of political opinion. Troll armies intervene in election campaigns by targeting disinformation. Conspiracy theories and propaganda dominate political debate. Digital psychometrics and psychopolitics are used to try to influence electoral behavior by circumventing conscious decision-making.

Byung-Chul Han‘s new essay describes today‘s crisis of democracy by tracing it back to the digital structural transformation of the public sphere. Han gives the crisis a name: Infocracy and locates it in the information regime as a new form of rule.