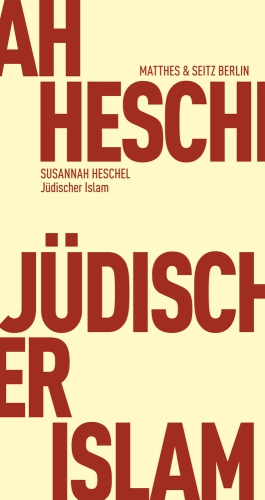 “It was Islam that saved the Jewish people!” So declared the distinguished medievalist S.D. Goitein in a 1958 lecture to British Jews. His declaration culminated a long century of Jewish scholarship on Islam that not only proclaimed theological affinities between the two religions, but viewed Islam as Judaism’s protector as well. Starting with the highly acclaimed book of Abraham Geiger, Was hat M aus dem Judenthume aufgenommen?, published in 1833, which launched modern scholarship on the Qur’an, Jewish scholars in Europe shaped the field of Islamic Studies and came to play central roles at German universities until the 1930s. Their interests in Islam included translating the Qur’an in German, Hebrew, and French; demonstrating parallels between the Qur’an and rabbinic literature; studies of Hadith, the chronology of the Qur’an, and medieval Jewish and Islamic philosophical traditions. What motivated the Jewish fascination with Islam? What aspects of European political and cultural currents shape the trajectory of that fascination? How does the Jewish fascination with Islam alter our understanding of European orientalism, and can we identify a distinctive German-Jewish orientalism?

Susannah Heschel is an American scholar and professor of Jewish studies at Darmouth College. Her researches focus on feminism and jewish-christian relations in Germany during the 19th and 20th centuries.