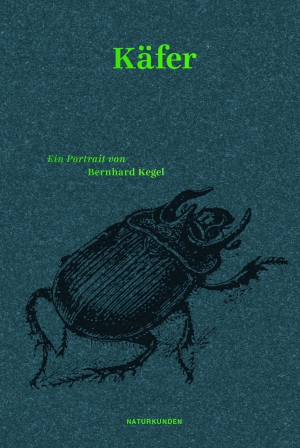 Genre: Essay, Nature Writing, Nature, Nonfiction
The story of the immense variety of forms of beetles and their biological as well as symbolic power.

A head, a chest, an abdomen - as concise as this list of body parts reads, as varied is what emerges from it: with their brightly colored and often iridescent carapaces, beetles display a wealth of forms that is unique in the entire animal kingdom. There are so many beetle species that not all are known to this day. After all, 380,000 have been described and given names so far. And every year a few hundred more are added. Bernhard Kegel, who has worked as a beetle researcher for a long time, draws a varied portrait of an insect that is often unjustly overlooked, reviled as a vermin, or even fought against, and whose history is closely linked to ours: From the pill borer, whose veneration is attested to by ancient Egyptian scarabs and who may have been the godfather of the invention of the wheel, to the supposed model for a momentous and often interpreted transformation in Franz Kafka's story and, last but not least, the insect mortality of the present. Bernhard Kegel's volume shows why we can by no means do without these armored bearers of nature.

Bernhard Kegel, born in Berlin in 1953, holds a doctorate in biology and is a writer. Since the 1990s, he has published numerous novels and nonfiction books on biological topics.

"Kegel writes far too lively and multifaceted not to enjoy being lectured by him. [...] At the end of the entertaining and informative, as expected fabulously illustrated volume, Kegel acts as a bug whisperer. And translates: 'You want to contact us? Not interested! Just leave us alone, please! Let us live our short lives and be who we are.' That's perfectly fine."