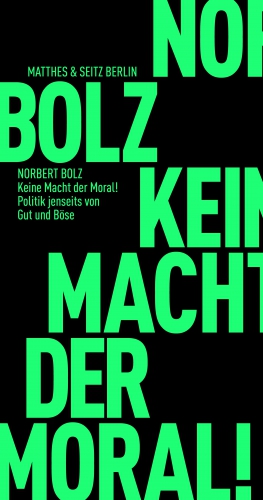 No power of morals!

Politics beyond good and evil

Is politics moral? Not at all, says Norbert Bolz. It may be ideological, a battlefield of conflicting interests - but good and bad are not facts here, but at best a matter of negotiation. In his new essay, the pugnacious philosopher and media scholar therefore calls for the emancipation of politics from morality, thus placing himself in the tradition of the raison d'état from Machiavelli to Max Weber. Bolz criticizes the rhetoric of protest movements and NGOs, whose weapon is the emotionalization and moralization of political issues and whose contempt is for realpolitik. The politicization of all areas of life and the accompanying moralization of all politics leads to the de-differentiation of our social relations. Looking at the (theoretical) history of our Western democracies from Aristotle to Machiavelli and Hobbes to Rousseau and Schmitt, Bolz traces the development of the relationship between politics and morality. The author thus ties in with his essay "The Avant-garde of Fear" and provides a theoretical superstructure for his considerations there.

Norbert Bolz, born in 1953 in Ludwigshafen on the Rhine, is a media and communication theorist and freelance publicist. Until his retirement in 2018 he taught as a media scientist at the FU Berlin. His publication topics revolve around the transformation of modern societies and the increasing uncertainty of postmodern societies.