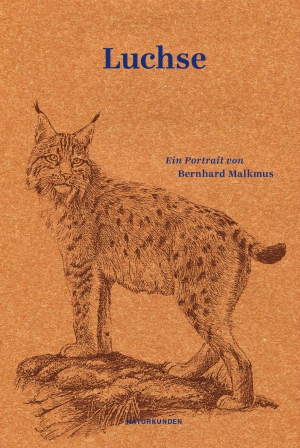 Genre: Nature Writing, Nature, Essay, History, Nonfiction
The watchful predatory cat that is not seen, but sees all the more: The lynx, an animal of our time

Even if you hardly ever get to see it, it can happen in more and more forest regions to be observed by a lynx yourself. The lynx prefers to remain hidden, in the thicket of nature, in the depths of cultural-historical archives. Like bears and wolves, they do not populate art and literature. But the lynx always appears when European civilisation is confronted with its self-contradictions - in moments of crisis and threshold periods such as the Renaissance or the Enlightenment. So it is probably no coincidence that the lynx, which had been all but extinct in Central Europe since the mid-19th century, is just now returning to our forests and perceptions, during a man-made species extinction of unimagined proportions.
In his portrait of the lynx as a keen observer of such upheavals, Bernhard Malkmus traces a fascinating alternative history of our culture. Using documents from antiquity to the present, from Galileo, Goya and Lévi-Strauss, the lynx comes alive as a shrewd connoisseur of man, inviting us to reflect on the connection between the destruction of nature and instrumental reason in the age of the Anthropocene. Its reintroduction poses us the long-repressed question of the extent to which we need to reintroduce ourselves to the wild in order to prove ourselves as citizens of the biosphere.

Bernd Malkmus,born in Aschaffenburg in 1973, is an essayist, poet and translator. His studies were followed by research at the Rachel Carson Center for Environment and Society in Munich. Since January 2018, he has been Professor of German Studies at the University of Newcastle (England). He has published numerous writings on the picaresque novel and ecological themes.