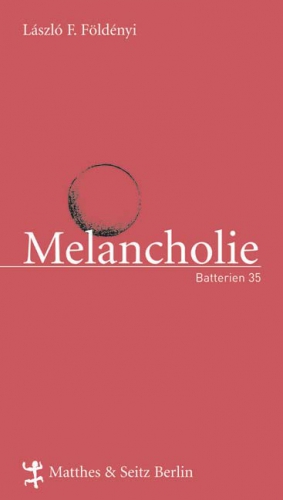 Genre: Philosophy, Humanities, Essay, Nonfiction
„Life today is planned in such a way that one should not be melancholic. When I wrote this book, I tried to uncover a kind of underground history of Europe, and I believe that the melancholic is distinguished by the fact that he wants to hide from this world, but he does not want to flee into the hereafter, rather he is familiar with a history that is concealed and repressed." László F. Földényi

One of today‘s most brilliant essayists turns to melancholy with his characteristic wealth of literary, aesthetic and historical insights. His book, part history of the concept and part analysis of the melancholy disposition, delves far into the past to examine the ambiguities of melancholy. On the way Földényi rediscovers melancholy as a source of energy and creativity, that would be able to keep us moving in the midst of our hardened present to set.

"László F. Földényi has written a study of melancholy that is fundamentally different from others. His book touches the reader deeply. He recognizes his own melancholy and encounters a completely different view of it, freed from all orthodoxy. Földényi insists that illness, melancholy, and death are insoluble, untreatable parts of human existence." Katharina Kaspers, Süddeutsche Zeitung

"Földényi's history of melancholy is an attempt at a definition of the term. It is an attempt at an approximation, the desire for a definitive grasp, and the realization that melancholy defies any containment because it refers to the infinity located in man, which can be experienced but not expressed. Földényi circumscribes the abysses of melancholy and traces them, beginning with the Greeks, through the centuries of European intellectual history." György Dalos

"Földényi's work is, on the one hand, a lovingly researched history of melancholy and, on the other, a defense of melancholiacs." Konrad Paul Lissmann, Der Standard "For all the author's erudition, which nevertheless nowhere led to an intellectual overloading of his expositions, we have here one of the most readable, thoughtful, and culturally sociologically sound investigations of melancholia." Adelbert Reif, Ärzte Zeitung