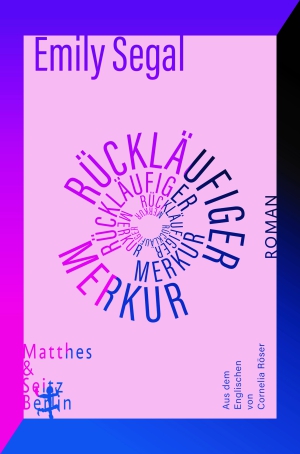 Autofiction. Emily Segal, artist and trend forecaster in her 20s, tries to tell the future by reading the present. Literature finds commercial form in the shape of eXe, a mysterious and well-funded internet start-up that offers her a job. A conceptual take-over is deployed; gendered power play ensues; queerness incubates; memes converge. Set in New York City, post-Occupy and pre-Trump. First person / mixed media / pulp. Not actually about astrology.

Emily Segal (b. 1988, New York, NY) is an artist, writer, and trend forecaster based in Los Angeles. She is the co-founder of Nemesis, a think tank and consultancy based in Berlin and Los Angeles, as well as the literary press DELUGE BOOKS. I also founded the trend forecasting group and art collective K-HOLE (2011-2016). Her debut novel Mercury Retrograde, has been published by Deluge in 2020.

“Emily Segal is almost mystically attuned to the cultural logic of our era. She lives its pangs and contradictions intellectually, emotionally and somatically – late capitalism’s Simone Weil.” Tom McCarthy

“It’s a brilliantly written novel of a moment in search of a shimmer, half ‘here’, half digital, an everywhere post branding work place place where few have dared to live and this writer, explorer, critic, philosopher of nonbusiness has done it deep. Segal‘s style is widely smart, different than deep (always). I mean her Mercury Retrograde is, it truly is.” Eileen Myles

“A thought-provoking and often extremely funny first novel looking back at the 2010s, which I couldn‘t put down. I should also say this book offered some very cathartic food-for-thought on the strange ways capital, cultural capital, and the Internet interacted in the 10s, for those of you who are still haunted by trying to make sense of it all.”
Emilie Friedlander, VICE