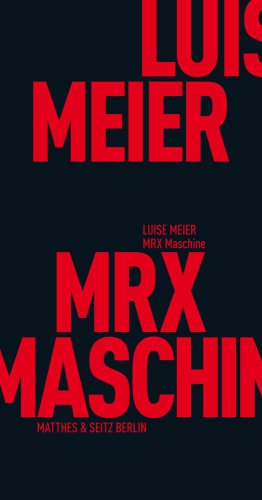 It‘s his 200th birthday this year, but Karl Marx is more dead than ever before: He either has to serve for trivial anticipations of demise or his theories get exploited, so the academic market gets new supplies. It‘s time we use Marx as a fuse cord. This is how the MRX Machine emerges. The MRX Machine taps feminism, postcolonialism, etc. and keeps searching for cracks, through which the perversion and the stench of proletariat becomes visible again behind multiple layers of the „entrepreneurial self “. The MRX Machine scans the scenes of public self-marketing and the private factory of body-optimization for traces of internalized class struggles. MRX Machine is a secret salutation to all refuseniks, it is analysis, agitation and agression at once - and consider yourself to be on sick leave while reading this book.

Luise Meier was born 1985 in East Berlin. She studied Philosophy, Social and Cultural Anthropology and Cultural Studies in Berlin, Frankfurt (Oder) and Aarhus and writes both fiction and nonfiction.

"This text must be proclaimed. Because it wants to incite, stir up, ignite." - Kristina Kaufmann, SPEX

"Marx's most erudite pupil for the time being this year is a convincing service worker. She entices with salutary prospects of contagion: with unproductivity." - Ronald Pohl, The Standard

"Only when he's out of the mausoleum does Marx become virulent again. Luise Meier, in her own tone, has succeeded in releasing the Marx virus again. A recommended read." - Dieter Kaltwasser, General-Anzeiger Bonn

"Luise Meier likes to rebel, she sees how people break down from the constant pressure to function, from the capitalist system. And she doesn't see why she should accept that. [...] She doesn't want to explain Marx, but to show what his thinking is good for today, if one adapts it, alienates it, carries it further. [...] The MRX Machine is thus perhaps best described as a theoretical pair of glasses that lets you see things you wouldn't otherwise question because they seem self-evident." - Greta Lührs, Hohe Luft

"The book is an important and enjoyable contribution to the search movement for a theoretically grounded, communist desire against the current authoritarian formation of society." - Michael Beron, analysis&criticism

"Using Marx as a fuse is what Luise Meier wants to do in her book. It subjects the theorist of capital to a new reading of liberating explosive power. This becomes particularly exciting when feminism comes into play." - Joana Ortmann, Bavarian Television

"The fact that this book, with breathtaking virtuosity, virtually hurls at us so much material for discussion, that is the great thing about this "MRX Machine"." - Patrick Eiden-Offe, Süddeutsche Zeitung

"a spectacular first volume of its very own making" - Fabian Thomas, The Daily Frown