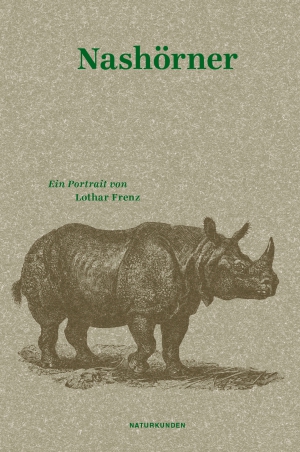 Plump and carefree in appearance, with a character somewhere between friendly pachyderm and angry monster : rhinos often have a hard time in people's descriptions. Nevertheless, or precisely because of this, they have exerted a colossal fascination for us for thousands of years. In his natural and cultural history of these largest land mammals after the elephants, Lothar Frenz takes a tender and knowledgeable look at the rhinoceros and traces its great appearances from the cave paintings at Chauvet to Dürer's famous woodcut and the horned "Maiden Clara", the star rhino of the 18th century and protagonist of the first Europe-wide advertising campaign. But its attraction was also its undoing: Frenz shows how, not least, greed for the legendary horn threateningly decimated its population. Thus, this portrait is at the same time a requiem for a legendary animal that man still misunderstands as a trophy.

Lothar Frenz, born in 1964, is a biologist and journalist. Since the 1990s, biodiversity and its conservation have been the focus of his work - whether in nature documentaries for ZDF, Arte and NDR, in GEO or in books.

"We call it a fabulous book, read quickly and learned a lot in the process, with wit and message."
- Sacha Rufer, umweltnetz-schweiz