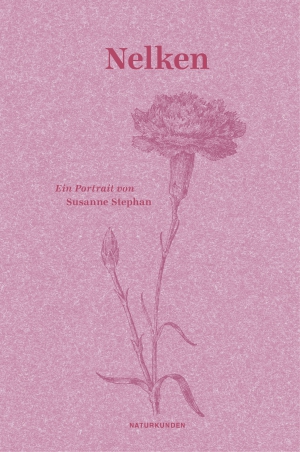 Botanically speaking, it is a starvation artist: it thrives best on sunny, airy slopes and needs very little water. But its existence in cultural history is as diverse in meaning as the range of its varieties: sometimes the carnation is a symbol of wealth, then of transition and mourning, sometimes the bearer of an intention to marry, then of frivolous interest. In white blossom, it was the distinguishing mark of the anti-Semites; the worker wore its polyester replica at GDR jubilee celebrations. Grown in pots and beds, exchanged, cultivated in the most diverse colours and forms by aristocrats and citizens, researching scholars and gardening amateurs, painted and drawn, often described, admired, but always also reviled because of their supposed artificiality and their docility to every new fashion. Susanne Stephan's rich portrait of this amazing flower is about nothing less than the laws of beauty and the question of the relationship between artificiality and naturalness.

Susanne Stephan, born in Aachen in 1963, studied German, history and Romance languages and literature in Tübingen and Paris, among other places; after working as an editor, she now works as a freelance author, writing poetry, short prose and essays.

"In a retrospective, Susanne Stephan dedicates herself in an insightful, instructive and exciting way to a plant that made the hearts of many florists in Europe beat faster for over 200 years."
- Garden Practice